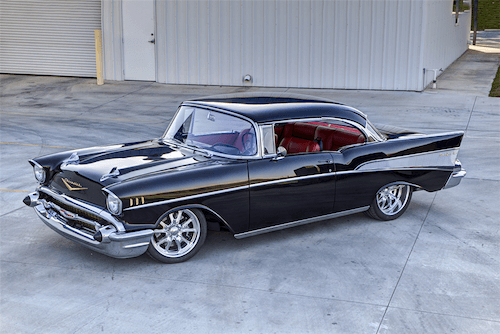 While the collectible car hobby doesn’t predate the car industry, given its front-and-center status among car enthusiasts you might think it had. Of course, what had been a small niche in the ‘50s and ‘60s has grown exponentially since the ‘70s, driven largely by the tastes of Baby Boomers and the booming growth in their incomes.

As the Boomers age, however, the collector car community opens itself to younger enthusiasts, differing wants and varied budgets. Auction houses – such as Barrett-Jackson – are well served by not only monitoring the changes in buyer demographics and purchasing patterns, but actually predicting them. In the aftermath of the Barrett-Jackson Auction in Scottsdale this past January, and in anticipation of the company’s Palm Beach Auction in April, a few key collector car market trends have been identified.

Perhaps the most obvious, given their domestic platforms and attendant chrome, are the Resto-Mods, professionally assembled and – with relative frequency – featuring a build quality never imagined by the Big Three or the UAW when originally manufactured. Examples consigned for Palm Beach (April 11-13) include a 1964 Corvette coupe and 1957 Chevy Bel Air hardtop. The Bel Air, with but 1,200 miles of driving since completion, is the result of a three-year build and – as you’d expect – thousands of labor hours.

Imports are also commanding both more attention and higher bidding. Beyond the ubiquity of the air-cooled Porsche market is Ferrari. The Barrett-Jackson Palm Beach Auction will feature a 2014 Ferrari F12 Berlinetta with but 6,500 miles, as well as a 2010 599 GTB Fiorano with just over 7,000 miles. And while Ferrari is a well-established name in collector circles, Lexus is staking a claim to its own collectible sphere with limited production models such as its LFA. At Palm Beach bidders can consider #444 of 500 LFAs offered worldwide.

At the opposite end of the ‘not built here’ spectrum is a 1965 Austin-Healey 3000 Mk. III. And if you’re thinking they don’t build ‘em like that anymore…you’d be absolutely right.